Xaar is a world-leader in the development of industrial inkjet technology. This is an extremely versatile non-contact technology; it can be used to apply a wide range of fluids with precision accuracy to a range of different substrates. The Xaar 1003 printhead can consistently pump out 42 million drops of ink a second, and the 2001 can pump out considerably more.

There are two key types of inkjet printing – Continuous Inkjet (CIJ – continuous flow of ink) and Drop-on-Demand (DOD – a drop of ink is only produced when it is needed). Xaar’s works with Drop-on-Demand inkjet technology.

DOD inkjet is divided into three classes – Valvejet (which uses needle vales and solenoids to control the flow of ink); Thermal inkjet (a current is applied to a tiny heating element which heats up rapidly as a result, causing the ink to vaporise and bubble within the printhead chamber, forcing the ink out of the nozzle); and Piezoelectric inkjet, which is Xaar’s specialism.

The printhead is the part of a printing system that contains nozzles for jetting ink. Piezoelectric printheads are made up of an active component called the 'actuator', a series of pipes and channels collectively known as the 'fluid path' and some electronics to control the individual channels. The actuator contains a series of parallel walls, made of PZT, that make up the channels. In Xaar’s bulk technology printheads, the electrical current is applied to the walls of the ink channels and the walls move as a result. Movement of the channel walls creates acoustic pressure waves which in turn eject ink from the nozzles at the end or side of each of the channels. 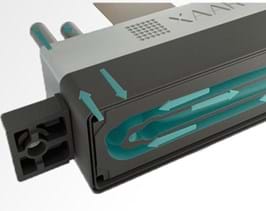 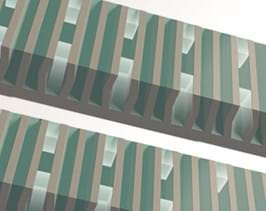 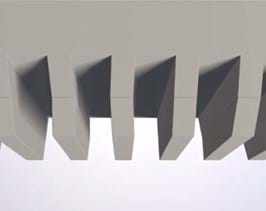